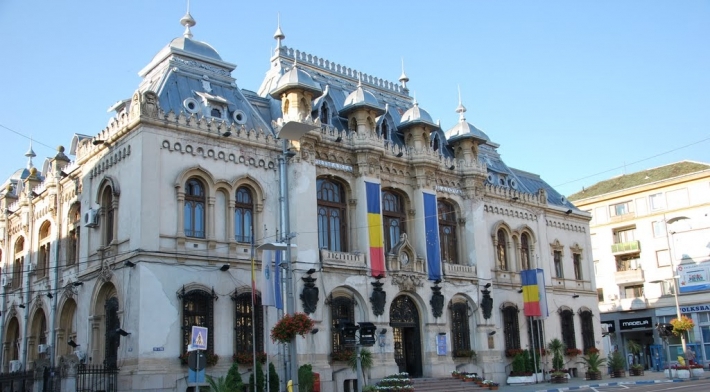 The Palace of the Bank of Commerce, a monumental building that houses the Craiova City Hall, is one of the most famous buildings in the city.
The Bank of Commerce was designed by architect Ion Mincu in 1906 and completed in 1916 by his student, Constantin Iotzu.
The building has a rich interior decorated with stuccoes, stained glass, Venetian mosaics and wrought iron grilles.
On December 12, 1897 (according to other sources in 1899), the banker and liberal politician from Craiova, Constantin Neamţu, set up in Craiova the Bank of Commerce, in the form of a family business.
The banking company quickly became one of the most important and successful banks with Romanian capital in the country, opening branches in several important cities.
At the time of its inauguration, the Bank of Commerce was one of the most beautiful buildings in the city and even in the country, impressing both by its exterior and its interior, richly decorated with stained glass, chandeliers and mosaics.
Built on 3 levels, the building had a basement (treasury bank thesaurus, various warehouses, archive, homeowner's residence, central heating, own power plant and mechanical workshop), ground floor (a vestibule, a large hall, offices and administration offices) and an upper floor (a vestibule from which, through a gallery, one can reach the hall where various offices, the boardroom and the director's office are located).
During the period 1916-1918, during the German occupation in Craiova, in the new building the German general headquarters were installed. When the Germans left Oltenia, the building was devastated, as it happened with several other occupied buildings.
After 1948, several institutions were operating in the building, including the Academy of Historical Sciences, Archaeology and Ethnography, the Municipal Committee of the Romanian Communist Party (PCR) and the Municipal People's Council.
After the 1977 earthquake, the building benefited from current repair works.
Since 1989, the former headquarters of the Bank of Commerce is the headquarters of the City Hall and the Local Municipal Council of Craiova.

In 2000, a feasibility study was carried out to consolidate the building, with the intention to request funds from the World Bank. However, the proceedings were stopped due to disputes over the ownership of the building, which is why no administration has since tried to start rehabilitation works.

The Monument of Buzesti Brothers