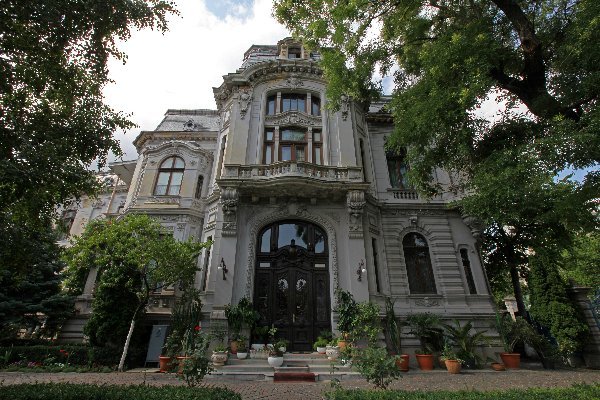 The Palace is located in Craiova, Frații Buzeşti Street, no. 10.
Here, more than 100 years ago, Gogu Vorvoreanu, a well-known landowner and attorney-at-law, laid the foundation for his future family residence. For this purpose, the boyar has used the finest materials and the most talented craftsmen, desiring with all the urgency that the new construction will successfully pass through time his family crest and legacy.
"Vorvoreanu" Palace was built at the beginning of the 20th century, between 1905-1910, according to the plans of famous architect Dimitrie Maimarolu.
The harmony of shapes, authentically woven in a pure Renaissance style, brings together the delicacy and the finishing touches of an interior rich in ornaments with the impetuosity of the outer forms and bas-reliefs.

Between 1916 and 1918 the German Military Command functioned in this palace.
Vorvoreanu Palace and many other properties and assets of the family were nationalized by the Communists.

Assets in the palace were not alienated. However, the sacrifice of the forerunners did not remain unpaid, and on May 31, 1964, after repeated attempts made by the representatives of the Craiova Archdiocese to the State Council of the Socialist Republic of Romania, the ”jewel” at Fratii Buzeşti Street no. 10 passed into the property of the Church, in exchange with the House of the Bania.

In the old Vorvoreni courtyard, a beautiful wooden church was displaced from Tălpăşeşti, Gorj, in 1975. The holy place, dedicated to "All Saints", is more than 260 years old and was founded by the monk Daniil of the Tismana Lavra, with the support of the Tălpăşeşti population. Today it functions as a metropolitan chapel, with a liturgical daily program.