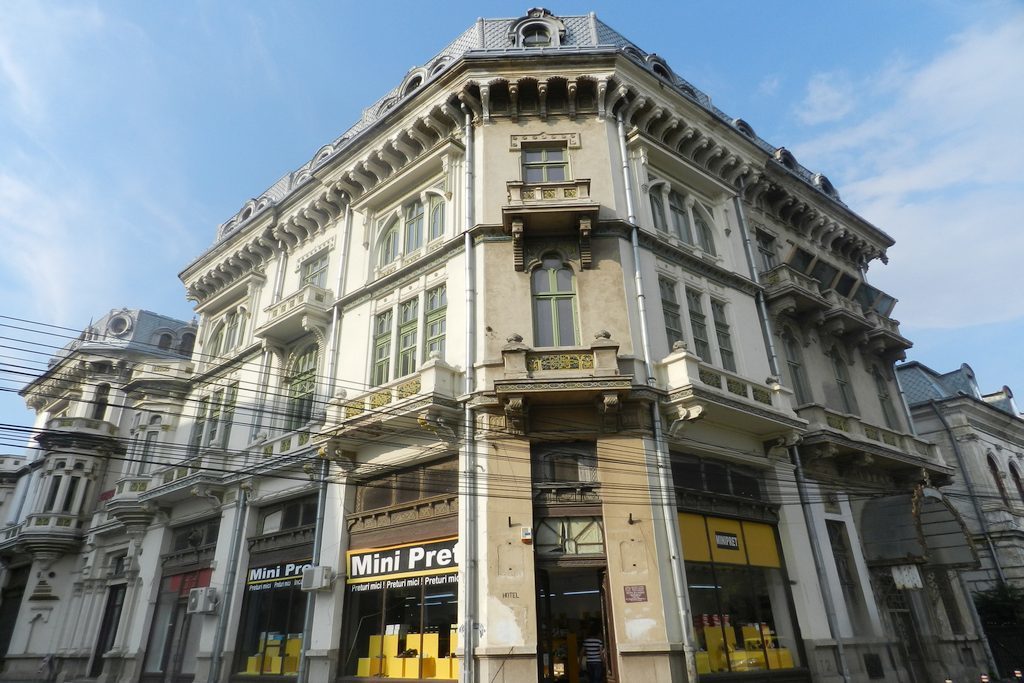 This building was constructed between 1898 and 1903 according to the plans of architects Thoma Dobrescu and D. Nedelcu. The building was erected on the land that was then the property of Madonna Dudu epitropy. The documents of that time speak of a contract concluded on November 23, 1896, between the epitropes of the Madonna Dudu Church in Craiova (Gh. Anghelescu and A. Carianopol) and the architect Th. Dobrescu from Bucharest "in order to make plans to rebuild a new establishment in Craiova City to replace the demolished one, called Minerva Casino, whose cost does not go as much as 500,000 lei." The building would have a shop, a confectionery and a café, and in the cellars and basements there would be facilities for the confectionery laboratories. A Club and hotel rooms would be arranged in the main body of the building. The majestic building will gather important names of the old days, becoming the symbol of yesteryear Craiova, but also a true altar of culture where artists of great value from those days kneeled.
From the stage at Minerva great names started their successful journey, including Madelaine and Manu Nedeianu, Iordănescu Bruno, Ion Vasilescu, Mia Braia, Ioana Radu, Dorina Drăghici, Petre Alexandru and many others. Also, this is the place where ideas were born, plans were made, and the art of the days was debated. Here we could see Amza Pellea, Gheorghe Cozorici, Constantin Rauţchi, Silvia Popovici, Sanda Toma, Ioana Bulcă, Andreea Năstăsescu, Rodica Tăpălagă, Ioana Măgură, Vasile Constantinescu, Vasile Niţulescu, Remus Comănescu, Geo Barton, George Mărutză or Costel Rădulescu and others. Minerva also hosted important people in the world: General Charles De Gaulle, Ciu En Lai, or Nikita Khrushchev.
The architectural style is less common with us, inspired by the Arabic / Moorish architecture. Specifical to this style are the door and window openings closed at the top with an arc of more than 180 degrees, enclosed openings in the arch of 180 degrees and multilobate, as well as the polychrome geometric decoration.
In the old days, at the ground floor operated shops, and at the upper floors were large and stylish salons, where cards and billiards were played. It was a place not affordable by many, as the luxury and prices made it high-class, so the most frequent characters entering through its doors were the boyars of Craiova.